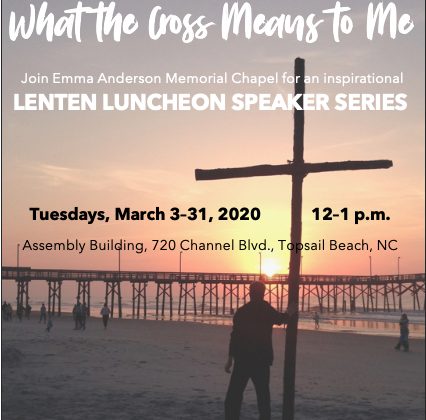 Please sign up for each luncheon in the south wing of the Chapel or contact Peggy Marziani at 717-279-1984. Reservations requested 2 days prior to each luncheon.

Brenda was born and raised in the Hampstead, N.C., area and has lived there all her life. She has seen and experienced many changes during that time. Brenda enjoys crafts, flower arranging, and writing inspirational quotes. After Hurricane Florence devastated her home and her daily life in September 2018, she met EAMC affiliate Freddie King through Samaritan’s Purse Disaster Relief Organization. It was a meeting meant to happen.

Jimmy grew up in Statesville, N.C. Upon graduating from the University of South Carolina in 2013, he joined the Young Life staff in Asheville, N.C. Young Life introduces adolescents to Jesus Christ and helps them grow in their faith.​ Jimmy moved to Hampstead in 2016 to become the Area Director for Topsail Young Life. He is married to Rachel Sappenfield, who is a 6th grade teacher at Surf City Middle School. Jimmy is an energetic role model serving our area youth.

Mark is a native of Rocky Mount, N.C. He graduated from UNC-Chapel Hill in 1964. He is married to his childhood sweetheart Susan Richardson. They have three sons and nine grandchildren. Mark is President of Daley Investments, Inc., but is now retired and living in Topsail Beach. Mark met Christ when he was 25 years old. He and Susan regularly attend Emma Anderson Memorial Chapel.

Baxter has a diverse background in military, academia, politics, publishing, fundraising, and community service. After 21 years in the United States Army, he retired as a Lieutenant Colonel. The things that matter most to him are God, family and country. Both he and his wife have led a prayer group for many years and he leads a prayer breakfast at his church. Baxter and his wife Glenda live in Chesapeake, VA. In 2018, he published a book entitled When Leadership Matters: Inspiring Stories of 12 People Who Changed the World.

Dr. Ribeiro is a primary care physician serving the Greenville, N. C., area. He’s also an ordained minister. Called to missions, he sold his practice and established a foundation to benefit his cause. Dr. Ribeiro later returned to medicine where he continues to care for those in need of his medical expertise. He was named Physician of the Year by the NC Academy of Family Practice in 2011. He’s been pastor of the Ormondsville Original Free Will Baptist Church since 1998. The church is thriving under his leadership.