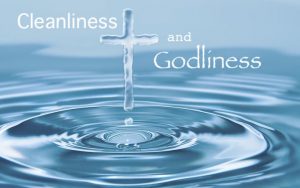 “Cleanliness is next to Godliness.”

Many of us have heard this saying before, probably from the mouth of our mother or grandmother. But where did it come from and what does it mean?
It was first “coined” by John Wesley in a sermon in 1788. I don’t think that Wesley was talking about physical cleanliness but rather spiritual cleanliness. When Jesus was talking to his disciples in the upper room on the night he was arrested, he assured them that they were “already clean because of the word I have spoken to you” (John 15:3). He wasn’t referring to whether they had washed their hands before supper, but that when the Holy Spirit would come upon them, He would make them “clean” before God.

If cleanliness is next to godliness, what is godliness? To answer that question, I yield to Jerry Bridges, a member of the Navigators Community Ministries Group, who wrote a sequel to his best- selling book The Pursuit of Holiness entitled The Practice of Godliness.* In this book he tries to answer the question, “What makes a Christian godly?”

This devotion to God according to Bridges is an attitude, not an activity, toward God that centers on three essential elements: fear of God, love of God and desire for God. Bridges goes into great detail explaining what each of these elements means. I encourage you to read his book. A copy of it is in our church library. But for now let me summarize by saying if we want to be godly, we need to develop our relationship with God on a daily basis. It is He, through the power of His Holy Spirit, who makes us both “clean” and “godly”. It is not of ourselves, lest any of us should boast.
“Cleanliness is next to Godliness.” All we need to do is stay focused on God to achieve both. Hallelujah!

Rich Pollock is a retired Presbyterian minister. He lives in Topsail Beach with his wife Julia. Both are active affiliates of Emma Anderson Memorial Chapel. Rich happily fills in at the pulpit when a guest minister is unavailable for Sunday worship.

*The Practice of Godliness by Jerry Bridges, NavPress, 1996.