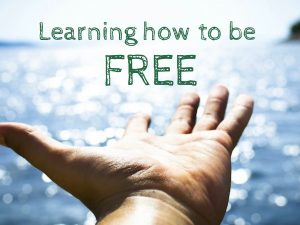 This Fourth of July, we as a nation celebrate our 243rd year of declaring our freedom from Great Britain. On June 9 we as a Christian church celebrated over 2000 years of another kind of freedom, freedom from sin in the coming of the Holy Spirit at Pentecost (see II Cor. 3:17).
The Apostle Paul said, “you have been set free from sin …” (Romans 6: 18). So how is this possible? Perhaps we first have to understand what freedom is and isn’t.

Some people believe that freedom is the power to do whatever one wants to do without restraint. This is actually a dictionary definition. But according to Scripture this is not true free- dom. This is just a license to sin. Perhaps freedom is not freedom from something (like “restraint”) but rather freedom to Someone (like Jesus). It is in our relationship with Jesus Christ that we learn how to be free, for He said, “if the Son sets you free, you will be free indeed” (John 8:36).

Notice the full context of Paul’s statement in Romans cited above: “don’t you know when you offer yourselves to someone to obey him as slaves, you are slaves to the one whom you obey— whether you are slaves to sin, which leads to death, or to obedience, which leads to righteousness? But thanks be to God that, though you used to be slaves to sin, you wholeheartedly obeyed the form of teaching to which you were entrusted. You have been set free from sin and have become slaves to righteousness” (Rom. 6:16-18).

In light of these words, let me amend my definition of freedom. Freedom is both freedom from sin and freedom to be in Christ. The reality is that as non-believers we were slaves to sin, but as believers we are slaves to Christ. Jesus said in His Sermon on the Mount that we couldn’t serve two masters. Either we will hate the one and love the other, or we will be devoted to one and despise the other (Matthew 6:24).

As you celebrate our nation’s freedom this year, continue to grow in your relationship with Jesus and enjoy your freedom in Him!

Rich Pollock is a retired Presbyterian minister. He lives in Topsail Beach with his wife Julia. Both are ac- tive affiliates of Emma Anderson Memorial Chapel. Rich happily fills in at the pulpit when a weekly guest minister is unavailable to lead us in Sunday worship.