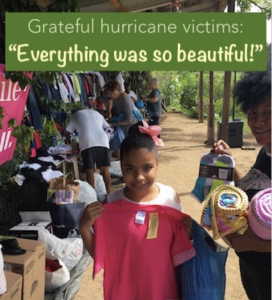 In the fall of 2017, it just so happened – as good things frequently do – that our Kingdom Crafters learned of EAMC affiliates Julia and Bill Howington’s scheduled cruise out of Puerto Rico in January. The Crafters knew that in the wake of Hurricane Maria, the Category 4 storm that struck the island last September and the worst storm to hit this island of 3.4 million people in 80 years, the victims there needed basic supplies.

Contact was made with Nannette and then it just so happened that everything else fell into place.

The Crafters set about preparing a “care package” to send with Bill and Julia. Actually, more than one. Twenty-four towels and washcloths, eight children’s Bibles, 25 string bags, 28 dresses, 26 blankets, and used children’s clothing were packed in three giveaway duffel bags and taken to Puerto Rico via the Howingtons.

Nannette and her son Kevin met the Howingtons at the port of San Juan to receive the donations.

What follows is Nannette’s story of what happened next, in her own words from an email, which has been edited [in brackets] for clarity.