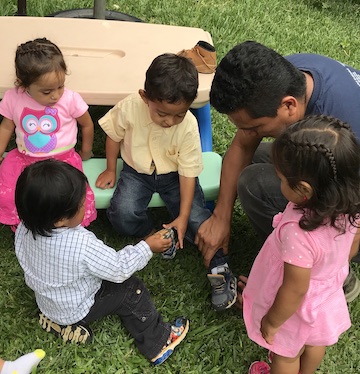 Last summer, Kingdom Crafters sent seven boxes of clothing and shoes to a church in Ohio. Why?

“Hidden on the side of a mountain, outside Guatemala City, Casa Bernabé (House of Comfort) is home to over 100 children” as it states on the website for Friends of Children Everywhere (FOCE), a U.S. nonprofit that supports the facility. CB, as it’s called, is near and dear to the hearts of affiliates Julia and Rich Pollock for it is from this orphanage that they adopted their son Sergio.

One of the Pollock’s contacts at CB is Ashley Cunningham, the development director for FOCE, which provides 80% of the funding needed to care for the children. The group’s mission is to bring the hope of Christ to the children who call Casa Bernabé home.

Ashley’s church in Ohio deploys mission teams to both the orphanage and Pine Ridge Indian Reservation in South Dakota. The items donated by our Crafters were divided between the orphanage and the reservation. What follows is a thank you note from Ashley:

Hi Julia! The distributions went really well. The shoes all went to Casa Bernabé and I have attached some photos of that (including one where a little girl wanted to try on a pair of our shoes when we were distributing them!)

The clothing was donated but not distributed while our (church) team was at Pine Ridge in South Dakota so I don’t have any photos of that to share.

Thank you so much for being such a blessing!
Ashley Cunningham
Development Director
Friends of Children Everywhere