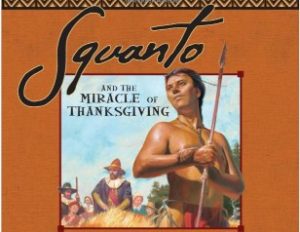 “Enter His gates with thanksgiving and into His courts with praise;
Give thanks to Him and praise His name. For the Lord is good and His love endures forever; His faithfulness continues through all generations.” (Psalm 100: 4-5)

In America the end of November is the beginning of feasting festivals that last for two months and end after the New Year. I’m talking about Thanksgiving and Christmas vacations, celebrations, and feasts with family and friends. But how or when did it all begin?

Not much is known about America’s first Thanksgiving celebrated by those first European settlers at Plymouth Plantation with a few Native Americans. Only two people who were there wrote about it— Governor William Bradford in his journal Of Plymouth Plantation, and Edward Winslow in a publication entitled Mourt’s Relations.

Among the 90 Wampanoag Indians who attended the first Thanksgiving was an “adopted” member from the Patuxet tribe whose name was Tisquantum. Most historians know him as Squanto.

Born sometime around 1585 near Plymouth, Massachusetts, Squanto was kidnapped by the English explorer Thomas Hunt who took him to Spain where he was sold into slavery. He later escaped and was taken in by Jesuit priests who introduced him to Christianity. He then traveled to England where he learned English.

When Squanto returned home to Plymouth in 1619 he discovered that his entire tribe was wiped out by an unknown epidemic and he was now alone in his native land. That’s when the Wampanoag Indians “adopted” him.

After the Pilgrims arrived in the new world in November 1620, they settled on the very land where Squanto’s tribe had lived. Of the 102 colonists, only 53 survived their first winter. The following year the Wampanoag chief, Massasoit, sent Squanto to become their interpreter and guide. If it were not for his advice, especially regarding how to cultivate the land and plant corn, beans, squash, and pumpkins, and where to hunt and fish, none of the Pilgrims would have survived in their new land.

Sadly, Squanto died from a mysterious illness in 1622 before the Pilgrims and Governor Bradford were able to establish their first official day of prayer of Thanksgiving on Thursday, November 29, 1623, in celebration of a successful harvest.

The miracle of that first Thanksgiving is how the Holy Spirit of God not only led the Pilgrims to seek a new life offering religious and civic freedom in a new land but also led Squanto, an English-speaking Christian to the Pilgrims to help them survive in their new home.

If you would like to learn more about Squanto and share with your children the story of how God protected him and guided him to the Pilgrims, I recommend the book Squanto and The Miracle of Thanksgiving by Eric Metaxas (1999). It’s available in the EAMC library.

Rich Pollock is a retired Presbyterian minister. He lives in Topsail Beach with his wife Julia. Both are active affiliates of Emma Anderson Memorial Chapel. Rich happily fills in at the pulpit when a guest minister is unable to lead us in Sunday worship.